Home » Health + Fitness » Fitness » Should You Practise Yoga On Your Period? Your Questions Answered.

I’ve been practising yoga for over 18 years now or approximately 216 menstrual cycles. During that time I’ve heard a range of theories about what you should and shouldn’t do while you’ve got your period. The multiple teacher training courses I’ve completed have also been a source of conflicting information.

In Ashtanga yoga, women are encouraged to take a ‘ladies’ holiday’ and skip class altogether. In Iyengar yoga, they’re often segregated into a corner of the room and given a gentle restorative practice. Many teachers advise against practising inversions, and others against backbends and deep twists. Other teachers still say there’s no reason to modify your practice at all.

When you consider that yoga was originally developed by men, for men, it’s no wonder there’s so much misinformation circulating. Personally, I think that women should be empowered to make informed decisions about their own bodies regardless of what time of the month it is.

So, here is my attempt – based on many years of yoga training and teaching, a great deal of reading, and several conversations with my gynaecologist – to provide you with all the information you need to feel confident to modify (or not) your yoga practice at that time of the month.

Yoga and Menstruation: From a Western Scientific Perspective

According to our western medical system, there’s no reason to modify your yoga practice.

There’s an outdated theory that’s unfortunately still kicking around some yoga circles, that going upside down during menstruation can lead to endometriosis by causing retrograde menstruation (ie. causing the blood to flow back into the body).

This piece of misinformation is the result of a 1920s study which attributed endometriosis to retrograde menstruation, combined with an assumption that your period is gravity-fed.

The 1920s study by Dr John Sampson is now considered out of date by the medical community, as subsequent research hasn’t provided the evidence required to back it up. In fact, a study completed in 1984 determined that 90% of women experience retrograde menstruation, and yet a small minority develop endometriosis. Clearly, the causes of endometriosis are more complex and are now widely considered to be related to the immune system.

Additionally, there’s scepticism around whether inversions contribute to retrograde menstruation. Blood doesn’t simply ‘fall out’ of your uterus and vagina. If it did, you wouldn’t bleed at night while you’re horizontal, right? It’s contractions of the uterus, not gravity that causes the blood to move, and so being upside down doesn’t have a significant impact on your flow.

As far as other yoga asanas go, there’s no scientific reason to avoid any of them. In fact, western doctors generally recommend light exercise as a way of minimising period pain.

Yoga and Menstruation: From an Ayurvedic Perspective

From an Ayurvedic perspective, menstruation is an opportunity for purification; it’s like a cleanse cycle. There are two key considerations regarding yoga and menstruation, relating to the movement and quality of energy within the body.

In Ayurveda, there are five movements of energy known as the ‘Prana Vayus’, which are responsible for different parts of the body and for various functions. It’s Apana Vayu that’s of interest here: Apana Vayu nourishes the organs of digestion, reproduction and elimination and is responsible for downward-moving energy.

During menstruation, this downward moving energy is dominant in order to support the elimination of menstrual blood. So, while western science tells us that being upside down isn’t likely to cause the blood to flow in the wrong direction, Ayurveda informs us that at an energetic level, we could be disrupting the flow.

According to Ayurvedic theory, this disruption of energy can lead to a cessation of flow, and potentially heavier bleeding later – not dangerous to our bodies, but not optimal.

The second factor to take into consideration is based on the Dosha theory. The Doshas are three energetic qualities that exist in each of us. Each phase of the menstrual cycle is governed by a Dosha, and during menstruation itself, Vata is dominant.

Vata is connected to the air element, and its energy is flighty, irregular and changeable. An excess of Vata can cause anxiety, nervousness, sleeplessness and fatigue. Vata is calmed by rest – hence the recommendation to avoid a vigorous yoga practice (for example, stimulating backbends and dynamic sun salutations) in favour of a few days off or a slow, restorative practice.

My Take on Practising Yoga on Your Period

Western medicine indicates that you can do anything and everything; Ayurveda suggests that you should do very little, physically.

I suggest that you listen to your body and honour what it tells you, just like you do for the rest of the month. It’s important to consider how you feel at the time, but also take note of how you feel after practice, and how you feel the next day. You might even like to record some notes so that you can see over time whether any patterns emerge.

If you feel bloated, fatigued, or overheated, particularly during the first few days of your cycle, then give yourself permission to rest. Respect the inclination to meditate rather than move. I don’t think it’s a coincidence that so many ancient cultures saw this time as our ‘moon time’, an opportunity for stillness and reflection.

On the other hand, if you feel like moving, dancing, practising handstands or hanging upside down from a chandelier then go for it, comfortable in the knowledge that you’re not at risk of harming your body. 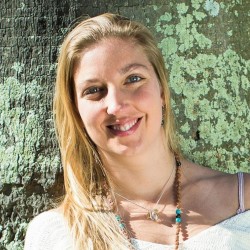 Follow
Marita Dortins
Yoga Teacher at Yoga With Marita
Marita is a long-time yoga teacher who’s passionate about supporting, educating and inspiring yoga teachers and students. Her mission is to teach people to breathe, to stand tall, and to live with compassion. She shares yoga at www.yogawithmarita.com

END_OF_DOCUMENT_TOKEN_TO_BE_REPLACED

Boxing Day Sale up to 50% off selected lines.